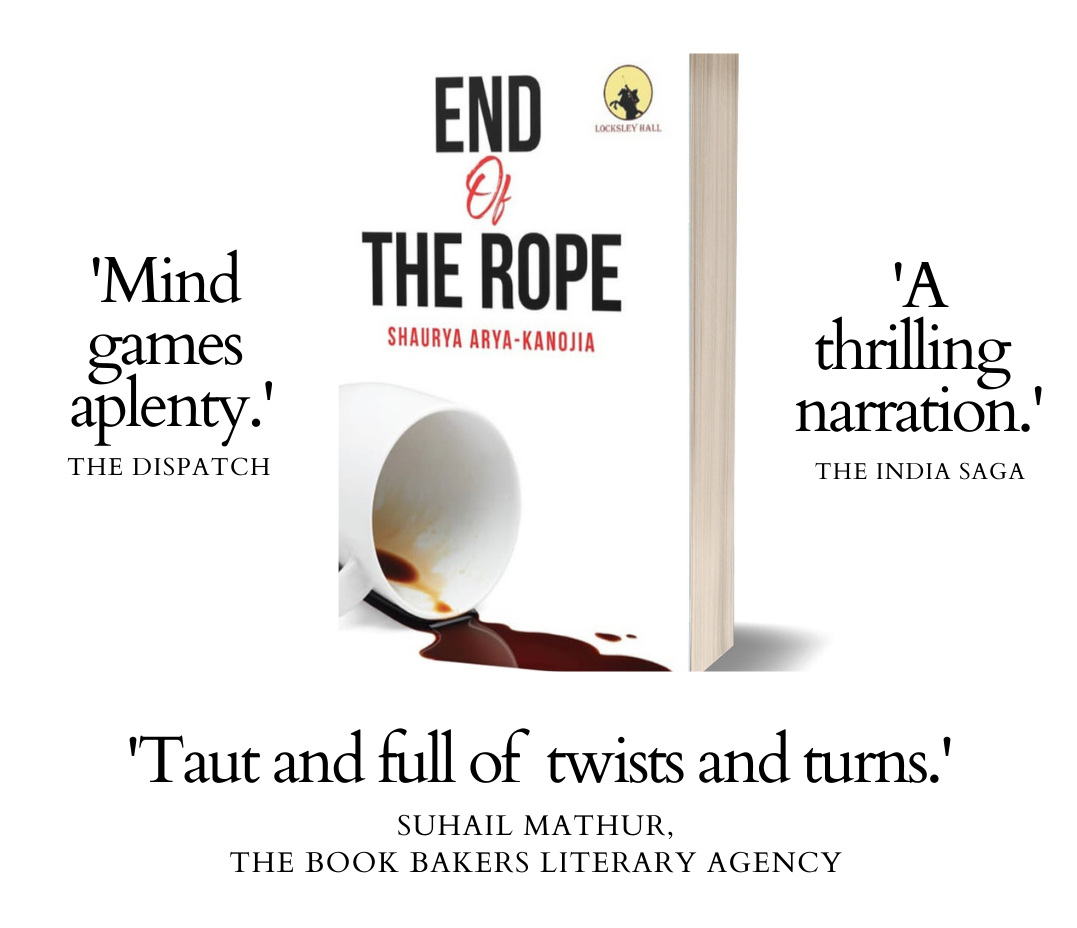 A cynical, old woman. A wary, impressionable employee. And a chat that will uncover the demons within them.

​Advana Naidu, a 70-year-old widow, invites Taishna Sen, her prospective caretaker, for a casual interaction. The two talk about their hopes, desires and how they came to be where they are. To Taishna, it is an unassuming conversation; until she discovers the similarities she shares with the old woman. Making its way through their pretences and questionable truths, the story attempts to answer the central mystery: How are the two connected? And who, among them, is at the "end of the rope"?

Following is an excerpt from the book:

“And – I’m sorry if you think it isn’t my position to ask – where does Taram come in all this?” Taishna knew this would definitely offend Advana. She was encroaching a territory she wasn’t supposed to; nor could she find a reason why it really mattered to her. It was plain curiosity, the greatest temptation of all.

“I mean, you have more pictures of him than you have of your husband. It does appear…”

"An intriguing ride into the twisted human mind" - News Track

Was this normal, Taishna wondered. If Advana did spend, as she said, some of the most glorious years of her life with her husband, was it too easy to wash away all the memories so easily? She still couldn’t understand why all of it made any difference to her (she also wondered whether her potential employment, if Advana still decides to hire her, keeping in mind the trend of the current conversation, was in jeopardy) or affected her in a way she couldn’t understand. Maybe, through Advana’s story, she was trying to find out if her feelings for Dev would die one day. If, even if there was a possibility of it, would she like to erase the memory of him? She did think about him a lot; and as much pain it caused, it also brought her relief. Relief that she was capable of feeling things for someone, of trusting someone, of putting her faith in someone unconditionally. If she considered Advana’s life as a point of reference, how well off was she in hers?

“Wondering how I ended up being this way, yeah?”

Taishna could only merely smile. “I guess.”

“Look, here’s the thing. And I’m sure you must have heard this from many people before me, people who’ve claimed to have a lot of experience in their lives. But it is true when people say that, eventually, nothing matters. This is what I meant when I was trying to touch on the subject that all of it is just pointless.”

“But all of it what?” Taishna’s sense of urgency was evident. She was getting tired of Advana’s cynicism. If nothing we did or had done in the past amounted to anything, then what were we but lifeless, soulless creatures walking aimlessly towards nowhere?

“All of this! This life! Tell me… Actually, it’s not wise to have this talk with you. You’re still young. You have your dreams, your hopes. You have a chance at life, in conquering what you’ve always wanted to. Give it another, say, thirty years – and if I’m sticking around then, maybe we’ll discuss this further.”

“No,” Taishna said, her voice sounding disturbed. “Tell me, what do you mean when you say all of it, whatever you mean by that, is pointless?”

“I mean… Aah, okay. I mean, no matter what you do, no matter how successful you are, how healthy you’ve maintained your lifestyle, no matter how much you’ve loved; at the end of the line, there will be a stack full of unpleasant memories you’ll be carrying with yourself to the grave. That’s the best I can explain it to you. Like I said, you’ve got a lot of years in you right now. I’m not saying that you’re not capable of understanding what I’m saying. I’m saying you might not be able to relate to it. And I’m not being condescending in any way whatsoever. If I were where you are right now, I’d slap myself right here right now.”

“So there’s no such thing as happiness? Is that what you’re saying?”

“Absolutely not. And this is where our difference in age comes.”

“No, wait. Give me a chance to explain. Don’t fly off the bat just yet.”

“I was happy, I’m not denying that. And, like I’ve said, I won’t trade it for anything. But there’s not even a smidgen of it I right now feel sitting in front of you. I don’t feel his presence around me, or reminiscing the time we spent together doesn’t make me teary. It was a good phase, and it had to end sometime. Unfortunately, it did sooner than expected. We probably thought we’ll live out our years happily in love until one of us died. But if it happened a little sooner, who can you blame?”

"Mind games aplenty in this psychological thriller novella" - The Dispatch

“Ha ha. Maybe I can. Maybe I should. But what good is that going to do? How many more years do you think I’ll survive? There isn’t much life left in me. Sure, I look good – I’ve always believed that – but I’m almost at the end of the rope here. And, whether I try to hang onto it or not, I’m gradually losing control of it. I can either spend the last of these few years sulking, spending in perpetual agony over how things could have been, how I could have been a better and a more understanding wife to my husband, how I should’ve bridged the gaps of differences that had come between us. But, and I ask you again, you think that’ll make my exit better?”

“Is this then what all these pictures are about? Making your exit better?” Taishna realised that she was beginning to choke up. Her eyes weren’t teary yet, but she knew she was about to shed a flood.

“As insensitive as I may sound to you, maybe it is. I won’t disclose the extent of my relationship with him to you…”

“Like I said, I’ll keep what’s between him and I between him and I. But I will tell you this. I’m not betraying or cheating on my husband. I don’t know how he would feel about this if he was alive, but that’s the point. He isn’t. In this moment, when I literally have no one, I have nothing to lose. If I don’t feel about someone in a particular way, I don’t have to pretend anything. If my destiny is to end up in a crash anyway, why not lose control of the steering and enjoy the ride?”​
Media Coverage and Author Panels